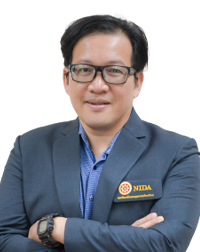 He is an expert in Environment who has been admired in his excellence by the world class institutes, he therefore has been honored to be an International Scientific Advisory Committee on Air Pollution Conference, Wessex Institute of Technology (WIT), United Kingdom altogether with an International Scientific Advisory Committee in Climate Change at OMICS Group, United States of America (USA). He also has been honored to be a Researcher at Institute of Earth Environment, Chinese Academy of Sciences, Xi'an, China. He is also a National Project Manager of Demonstration of BAT/BEP in Fossil Fuel Fired Utility and Industrial Boiler in Response to the Stockholm Convention on POPs in Thailand, United Nations Industrial Development Organization (UNIDO). In addition, he is a Director of NIDA Center for Research & Development of Disaster Prevention & Management. He has been graciously appointed to be a Professor of School of Social and Environmental Development (NIDA).